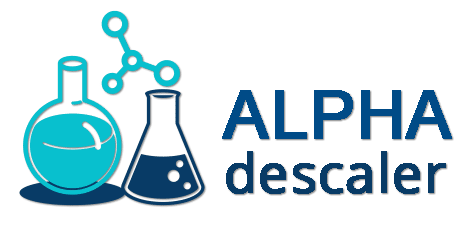 Get your free sample

There are several methods of processing plastic. Each provides a definite end product. The most popular methods are:

Throughout the plasticizing process, vast amounts of electric energy are consumed. While some of it goes into melting the plastic, more is utilized to drive the machinery. 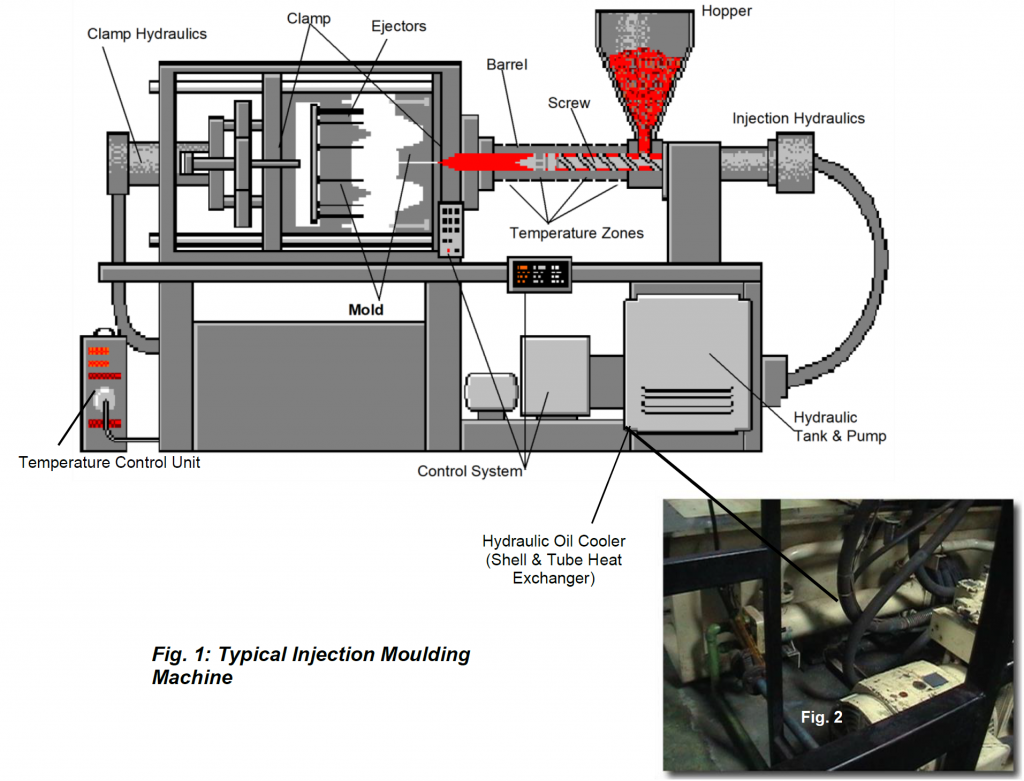 The most common of the plastic processing methods is injection molding. Injection molding is a highly repetitive series of steps. It begins when virgin; regrind, or a blend of plastic granules is fed through a hopper into a barrel. At one end of the barrel, a screw turns under mechanical force to auger the plastic pellets through it.

This action causes shear forces. The result melts the granules as they progressively move toward a nozzle at the end of the barrel. Often, additional heat is induced by electric band heaters mounted along the length of the barrel to ensure even melt temperatures. At this point, the molten plastic is under high pressure so that it can be fed into a mold that gives specific shape to the plastic.

The injection cycle is followed by a cooling cycle. Cool refrigerated water flows through specifically designed water channels in the mold. The water extracts heat from the plastic until the plastic solidifies. An ejection cycle follows where the newly formed plastic is removed from the mold. At this point, more plastic is fed into the barrel. Injection molding is a cyclic process: grind, melt, cool, and eject. It repeats over and over to produce identical parts at a certain frequency. Throughout the entire cycle, cool water circulates through cooling channels. Water keeps the mold cool as the mold fills with plastic. Water cools the plastic at the mold. Finally, water may even receive the molded plastic as it is ejected from the machine for final cooling.

There are two sections of a plastic mold: a stationery area, and a moving area. Both sections are attached to platens or metal plates that are part of a machine. Platens facilitate changing of molds on an injection machine to mold different shapes. Each half mold is often fitted with two water manifolds. The first manifold distributes incoming cool water to various cooling channels throughout the mold. The return water channels into the second manifold. Then, water flows back to its source of origin.

Injection molding machines come in different styles. The most common is hydraulic oil driven units, closely followed by toggle machines. A relatively new entry in the market is a hybrid hydraulic/toggle combination of the two basic styles. As the name might suggest, a hydraulic machine uses the force of fluids to move the platen (mold). The fluid is pumped through the machine components by electric motor-driven pump(s). The resulting mechanical work generates frictional forces that raise the temperatures of the hydraulic fluid. Since hydraulic fluids have the most desirable characteristics (that is, viscosity) at 105°F to 115°F, heat must be removed from the hydraulic fluid. A heat exchanger performs heat removal and is an integral part of an injection-molding machine. The heat exchangers are sized to permit adequate transfer of heat from oil to cooling water when the incoming water temperature is as high as 85°F.

A toggle injection machine uses mechanical links to move the platen (mold). Some hydraulic fluid is used for other functions, but much less heat is generated when compared to the hydraulic units. Nevertheless, a smaller heat exchanger is required to remove the heat from the toggle machine’s hydraulic fluid.

The hybrid hydraulic/toggle machine’s heat generation falls somewhere between the levels of reached by the hydraulic injection and toggle injection machines.

Unlike injection molding, extrusion is a continuous process. Raw plastics material is fed into a barrel in which a screw transports the plastic towards the front where a die is located. While the plastic is being transported, it is also sheared and melted on its way to the die. Supplementary heat is induced into the plastic via electric heaters that are fitted along the length of the barrel. An electric motor turns the screw through a gearbox. This motor can be set to varying speeds according to the characteristics of the plastic being processed. Cooling Often, cooling channels are supplied in the dies where initial cooling of the plastic takes place. The plastic or extrusion emerges from the die somewhat solidified into a precise shape. In this state it passes through water baths where additional and final cooling takes place before the finished product is removed for further processing. This second cooling can be accomplished in open water baths or elaborate vacuum tanks where water is sprayed over the product. Precise pressure must be maintained in the cooling chamber to hold the dimensional stability of the product. 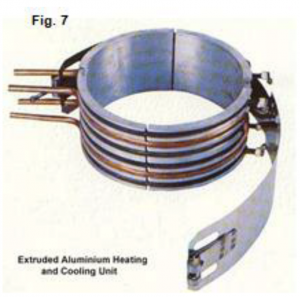 In extrusion processes, there are several areas that require cooling. A primary area is the gearbox that is flooded in hydraulic fluid. This fluid needs to be cooled in order to prevent it from breaking down. The dies, or areas where the plastic takes shape, need cooling such that the product solidifies and retains its shape before finally entering the second and final cooling baths/vacuum chambers. Refrigerated water is often used to accomplish this cooling of plastic. It is mandatory at the die and the mold for extrusion processes. Gearboxes require relatively small heat removal. Water at a temperature of 85°F is quite adequate to transport the heat away from the gearbox.

Blow molding is another distinct operation where plastic has different processing conditions to obtain the desired result. Typical products are plastic bottles. Plastic bottles are often manufactured in two processes. In the first, a thick plastic tube is injection molded where the neck section of the bottle is formed. The neck requires great precision while the body of the bottle is in the shape of a thick tube. These forms are often called the perusens or preforms. During this process, the machine and molds are cooled just as in a typical injection molding process. In the second process, the preforms are reheated and set in a blow molding die. This machine uses compressed air that is injected in the preform to blow through the tube to form the shape of a bottle in the die. 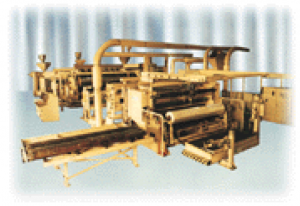 Blown film is a variation of blow molding. In this process, plastic is melted in an extruder and fed into a die. When the plastic comes out of the die, it emerges as a film. It is impinged or forced to rise by a flow of refrigerated air that cools the plastic. Just before the bubble collapses, it is rolled up. The result is often described as a rolling and folding of the now filmy sheets of plastic.

Although somewhat misplaced in this section, other plastic sheets are manufactured by an extrusion process. In extrusion, molten plastic flows through a long die in the form of a sheet. The sheet then passes over a number of cooling rolls. These rolls are maintained at different temperatures to transport the heat away.

Lamination is yet another process where a number of plastic and non-plastic films are sandwiched between dies and heated (generally by steam) until they fuse and cool.

In vacuum forming, material (often a flat piece) is also introduced in a vacuum die and heated. At this point a vacuum pulls the material to force the blank sheet to assume the desired form. In either process, raw material or a partly finished product (lamination and vacuum forming) is first heated, given a desired form, and then cooled before the final product is obtained. Cooling is of fundamental importance in these plastic-processing activities, as it is with those previously described. 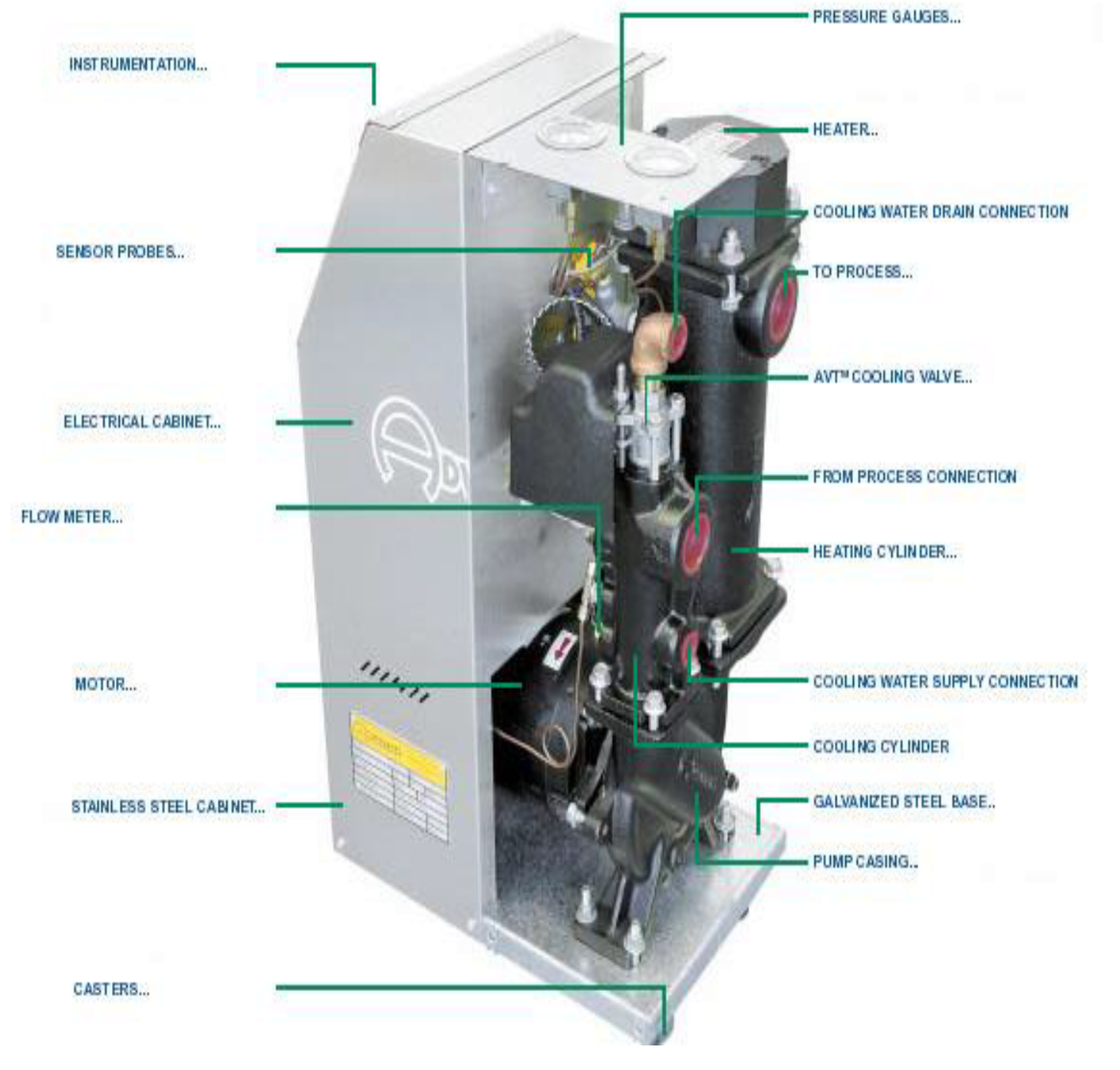 If you need consulting beyond the scope of a complementary sales inquiry, please contact us by email.

See other unique technologies from TECH-SALES

This website uses cookies to improve your experience while you navigate through the website. Out of these cookies, the cookies that are categorized as necessary are stored on your browser as they are essential for the working of basic functionalities of the website. We also use third-party cookies that help us analyze and understand how you use this website. These cookies will be stored in your browser only with your consent. You also have the option to opt-out of these cookies. But opting out of some of these cookies may have an effect on your browsing experience.
Necessary Always Enabled
Necessary cookies are absolutely essential for the website to function properly. This category only includes cookies that ensures basic functionalities and security features of the website. These cookies do not store any personal information.
Non-necessary
Any cookies that may not be particularly necessary for the website to function and is used specifically to collect user personal data via analytics, ads, other embedded contents are termed as non-necessary cookies. It is mandatory to procure user consent prior to running these cookies on your website.
SAVE & ACCEPT